You are here: Home / Biography / Vienna to Auschwitz

Instead of the whole, the consummated, of which I dreamed, I leave patchwork, the incomplete, as man is fated to do…I meant well and aimed at high goals. Not always could my efforts be crowned with success… But I have always given my all and have subordinated my person to the cause, my inclinations to my duty. I didn’t spare myself and was therefore justified in demanding that others, too exert their strengths to the utmost. 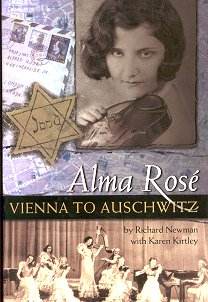 Alma Rosé was born in 1906, the daughter of Gustav Mahler’s sister, Justine, and Arnold Rosé, the concertmaster of the Vienna Philharmonic from the 1880s until 1938. The Rosé household was a veritable “Who’s Who” of musical personalities from Brahms to Schoënberg, Mahler, Strauss, Bruno Walter, Berg, and Webern.

The venerable Rosé String Quartet, whose recordings from the 20s are still available, rehearsed at home, and Alma Rosé had music in her ears continually. “The Rosés,” wrote violinist Leila Doubleday, “were a family distinguished by their vitality, talent, and devotion to others.” Alma, whose namesake was her aunt Alma Mahler, Gustav’s wife, had among her school friends the violinist Erica Morini. Her marriage to Czech violinist Vasa Prihoda catapulted her to musical stardom.

The Mahler’s and Rosés appeared to live charmed lives, but for Jews, even those who made little of their ancestry, tensions could erupt at any time. Mahler and his sister Justine were baptized in the Catholic Church to ensure his appointment as director of the Vienna Opera in 1897. Whether it was anti-Semitic pressures that led to his 1907 departure for New York has long been a subject for lively debate.

The early chapters of this rich biography present a colorful and detailed chronicle of musical and intellectual life in Vienna at the turn of the century. The Rosés, caught up in their lives among the artistic elite, seemed to have little understanding of the political realities surrounding them. When Arnold Rosé, along with his Jewish colleagues, was abruptly dismissed from the Vienna Philharmonic after the German Anschluss in 1938, he was taken totally by surprise. His 1939 escape to London and the subsequent years, including his attempt to reestablish the Rosé Quartet in England emerge as a painful end to a distinguished career.

Alma’s own career as a violinist began with daily lessons with her father, to whom she determined at an early age to be a worthy successor. Like all her father’s students, she was forbidden to play children’s games in which she might injure her hands. She made her debut in 1926 with the Vienna Opera Orchestra, playing the Beethoven Romance in F, the Bach Double Concerto with her father, and the Tschaikovsky violin concerto. A later performance of the Bach Double with her father is the only known recording of Alma Rosé playing the violin.

While Alma was not by all accounts a major talent as a violinist, she nevertheless brought a serious work ethic to her music making. Two years into her lonely marriage to Prihoda in 1932 she formed her female orchestra the Wiener Walzermädelne, the Vienna Waltzing Girls, which toured northern Europe. “Alma,” according to Ingeborg Tonneyck-Müller, one of the members of her orchestra, “was a tremendous rarity. Women simply did not do what Alma was doing in those days.” Stories of rehearsals suggest a director who placed almost impossibly rigorous demands on her players, including playing everything from memory.

After the Nazi annexation of Vienna in 1938, Alma and her father subsisted in London, among other out-of-work musicians with the help of friends and charity. Concerned for her aging parent and desperate for work, Alma was able to find a theatre job in Holland, and to give occasional house concerts. However, Alma was not an easy person to live with in the best of times, and the stays with her accommodating hosts, often in cramped quarters, with inadequate heat and food, were fraught with tension.

In 1942 Alma’s Holland visa expired, and unwilling to face unemployment in London, she was forced to flee to occupied France. Captured finally in Dijon, she was transported to the Auschwitz-Birkenau concentration camp, and her life there is described in chilling detail.

Hers was an “Escape into Excellence.” Her building of a women’s orchestra, from a ragtag group with inappropriate instruments, to a musical organization giving regular concerts borders on the miraculous. She managed to establish and maintain the same uncompromising artistic standards her uncle Gustav Mahler had imposed on the Vienna Opera orchestra forty years before. Victor E. Frankel has aptly characterized Alma’s life in the camp: “Everything can be taken from a man but one thing, the last of the human freedoms – to choose one’s attitude in any given set of circumstances, to choose one’s own way.”

Alma’s death in 1944, of an undiagnosed illness, was the final tragedy for Arnold Rosé. Forced to cancel his remaining concerts, he played his Stradivari violin for the last time on October 2, 1945. The violin was sold to finance his emigration to the United States, but instead he died quietly in his sleep in London.

This book abounds with well-chosen personal recollections and penetrating insights, not only about Alma Rosé’s personal history, but also about the artistic, social and political scene throughout and after her relatively short life. When the Vienna Philharmonic appeared in London in 1947, Friedrich Buxbaum, long-time cellist of the Rosé Quartet returned to the orchestra, eager to play under the beloved Bruno Walter. After the first rehearsal tune-up Buxbaum stood up, “Dear Friends,” he began, “I’m so happy to be invited to be with you again. I have heard you tuning. It’s wonderful ganz Judenrein” (completely free of Jews)—a bitter pun since rein also means “in tune.” The response, bassoonist Hugo Burghauser remembered, was “deadly quiet.”