You are here: Home / History / The Value of String Instruments at the End of the 18th Century 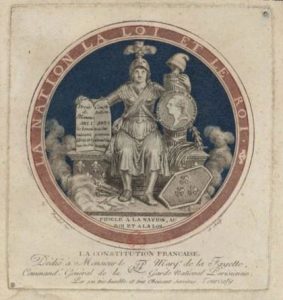 There is, in the National Archives of the French Republic, a document of exceptional interest for the history of the violin trade: the inventory of musical instruments seized by the revolutionaries in Paris in 1792. 1792 was the apex of the French Revolution, the year of its desperate fight to survive on a path to self destruction, the year when “the fatherland was threatened” by an onslaught of outraged neighboring monarchies following the execution of King Louis XVI and his Austrian wife, Marie-Antoinette. It was the year young volunteers massively and successfully rushed to defend the borders, and “Terror” was the brutal answer of the “incorruptible” Robespierre to the risk of civil war inside the homeland. It was also a year of the most innovative and progressive decisions, the implementation of the metric system for instance, and the abolition of slavery in the colonies.

These decisions were made by the “Convention,” the elected assembly, which briefly ruled the country, and ushered in the modern face of France—and the future Napoleonic Europe—on the ruins of the Ancien Régime. Among the many “Commissions” created by the Convention, to deal with the innumerable problems inherited or invented by the Revolution, there was one in charge of the Fine Arts, which besides a lot of other matters, addressed the question of what to do with the treasures found in the mansions of the thousands of aristocrats, who had either fled, or were condemned to the guillotine. And a sub-sub-commission, chaired by Antonio Bruni, was appointed specifically to inventory and appraise the musical instruments. The Bruni report inventories only some one hundred Parisian households, representing, at best a small sample of the French aristocracy’s musical estate at the time. Nevertheless this sample includes a sizeable number of items, something like four hundred altogether, and is quite probably statistically representative.

The majority of the instruments are keyboard: a few organs, but mostly harpsichords and fortepianos, in approximately equal numbers. While the sixty some harpsichords (including a few spinets) are of various ages from the most ancient, made in 1606 by H. Ruckers in Amsterdam, to the most recent, from Broadwood in London, and only a few years old, the five dozen fortepianos were of course all recent, mostly made in the 1780’s, with a few Erard of 1790, being practically brand new. It was clearly the fashion for rich families in these years to buy a piano, which was often imported from England. Witness a 1786 Zimmerman, seized from the estate of the hapless Lavoisier, who was an illustrious scientist, but also Fermier Général, i.e. tax collector for the Crown, and as such condemned and beheaded, after the King attempted to take refuge abroad.

In second position by numbers behind keyboards rank string instruments: 74 violins, 21 violas (and quintons), as well as 24 cellos or “bass.” These proportions do not suggest a selective attrition of instruments, which would have been easier to hide, take away, or steal. The number of guitars, relatively high (20), and of harps (18), mostly recent and made in Paris, is comparable to that of woodwinds (23 flutes, etc.). Brass instruments are represented only by some ten hunting horns; just as in our day, trumpets, trombones and tubas do not connote the posh upper class.

If we consider more precisely the violin family, and analyze the composition of the sample in terms of provenance, we find:

To be noted: there are no “vieux Paris” such as Bocquay and Pierray. Were they already out of fashion, and thus had disappeared into attics? Possibly that is the case, although it must also be remembered that many of the instruments are “unlabelled.”

Now for the most intriguing, if not astonishing, part of the 1792 inventory: the appraisals Bruni and his colleagues put on the value of these instruments. While many pianofortes commanded estimates in excess of 1000 Francs, one finds an Andrea Guarnerius violin valued at 200 Francs, a Steiner at 150, some Amatis for a mere 100 Francs or less, a “napolitan” violin for 20 only. One reads for instance, at the D’Ormesson household, “a small Amati, a small Guarnerius, a viola and a bass, 50 Francs for the lot”! As for a 1710 Stradivarius viola, it receives no special notice, not even an estimate… Jules Gallay, the cellist and musical essayist who, about a century later, published the Bruni Commission 1792 inventory of musical instruments seized by the French revolutionaries at the homes of aristocrats, thought that Bruni’s appraisals were total fancy, and deplored his incompetence. We do not share his opinion. Of course, in 1792, Duport had been playing his (now) celebrated Stradivarius cello for some time, and ten years had elapsed already since Viotti’s debut in Paris, and the success he had scored at the Concert Spirituel with his 1712 Strad. During these years Viotti had not only inspired Tourte’s definitive model for the bow, but also trained the new generation of violin players, the Baillot, Rode, Kreutzer who were to found the school of the French Conservatoire – another lasting creation from the Convention – which later ruled the European romantic performance style. In fact Viotti himself had just fled the Revolution and was trying to resume his musical career in London. Bruni, an Italian violin and viola player, and a successful conductor established in France since 1779, was certainly no stranger to these trends. It seems unbelievable, especially considering the presence of notable instrument makers and dealers like Cousineau or Leduc acting as experts on the Bruni Commission, with the risks they would have taken in cheating, that the appraisals they undersigned could have been far removed from the then current market values. Indeed it must be remarked that these estimates are quite coherent. If, to make a try at a comparison with our contemporary rates, we multiply the Franc value by 10 and express the result in £, we obtain the following averages (and brackets):

This is not really different from what we would observe in any auction catalogue today, were it not to include any prestigious Italian string instruments. Of course the difference is that the Bruni catalogue did include quite a few. The inescapable conclusion is, that as late as the last decade of the eighteenth century, ancient masters’ instruments, and notably those of the Cremonese, did not at all enjoy the prestige, and the enormous plus-values, which they must have acquired later, in the nineteenth and twentieth centuries. Finding a Stradivarius at the Fermier Général Boulogne’s was simply nothing special… just as in Gallay’s time it was nothing special to buy a painting by Van Gogh for less than 100 Francs!

What did the revolutionaries do with all these instruments? Where are they now? These are questions that Gallay had already investigated over a century ago. Initially the instruments were consigned at the Menus Plaisirs, a depot on rue Bergère, which location the Conservatoire much later abandoned for rue de Madrid, near rue de Rome, still a landmark of music and lutherie. The catalogue of the collection of the Conservatoire—now harboured in the museum of the Cité de la Musique in La Villette—contains no record however of the Bruni instruments, just as in Gallay’s time. Gallay wondered if they had been transferred to another depot, like Cluny, or the Abbaye St Martin, where another Conservatory, the Arts et Métiers, which had been created by the Convention, and which still exists, along with its museum. It is not altogether impossible that one day some forgotten crates, full of string instruments, will be found in some cellar here or there… But unfortunately it is much more likely that the instruments where dispersed early, after the Revolution ended. In 1794, following the assassination of Robespierre, in the “revulsing sales of everything that belonged to the émigrés, the condamnés, the ruinés, in the Paris of the Directoire when the great city was but a vast auction closing out the guillotine” write the brothers Goncourt. Unless they shared the fate of the twenty-two old harpsichords mentioned in another document of the French National Archives, which should have constituted the embryo of a museum collection, but instead were burned to heat the classrooms when the Ecole Royale de Musique—the restoration name for the Conservatoire—was reopened in 1816, yet another telltale sign of the respect they had to this date for the value of antiques.

Previous: The Philosophical Outlook on Ancient Greek Music: Plato
Next: About Soundpost Online