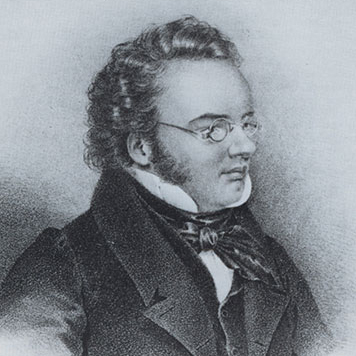 Two of Franz Peter Schubert’s latest and greatest works of chamber music were composed within his last few years of life. His G Major String Quartet (D. 887, Opus 161) dates from 1826, and the C Major String Quintet (D. 956, Opus 163) was written in 1828, only months before the composer’s death. Schubert never heard either work performed, and the two works share a similar early history: both were neglected for quite some time after their composition, and both received their first performance in 1850. The group performing the premiere of the string quartet on December 8th of 1850 was an ensemble led by Joseph Hellmesberger (director of the Vienna Conservatory at the time), and the same ensemble, in fact, had premiered the string quintet on November 18th, only three weeks earlier. Apart from their biographical similarities, the two works share many musical characteristics, ranging from overall structure to harmonic, motivic, and melodic traits. I will mention some points about the commonalities of both works as wholes, but I will focus my comparison on their respective second movements (the slow movements).

The two most striking features of these works are perhaps also the factors that cause the seemingly “bright” keys of G major and C major to come across with a rather dark and deep character. These are Schubert’s timbral exploration and the constant conflict between major and minor modes. The latter provides an undercurrent of ambiguity which carries from the very beginning of each piece right through to the end. This contrast is exemplified in the opening measures of the two works. The string quartet begins with a tonic G major triad in the upper three voices, tied for two bars. The chord swells from piano to forte, and then is immediately destabilized when, in the third bar, it resolves to a G minor chord. The quintet, as well, begins with all but the lowest voice, swelling on a tonic triad. This chord is destabilized by moving to a common tone diminished chord, the common tones being the Cs in the upper and lower voices. While the violin and cello hold their pitches, the inner voices change, creating an internal conflict in the truest sense.

Apart from the major/minor element, Schubert, in these two works, also undergoes a timbral exploration of the middle and lower ranges of the string ensemble. His choice to call for an extra cello in the string quintet (instead of the more standard extra viola, as Mozart preferred) was virtually unprecedented: Boccherini had written cello quintets, but their nature was more in showcasing the virtuosic capabilities of the first cellist, and not at all equal like Schubert’s parts are. It is clear, even in looking at the G Major String Quartet that Schubert was fascinated by the timbral possibilities of the cello’s tenor range: in much of the second movement the viola provides the bass while the cello sings above, and the two instruments only reverse roles when the viola reaches the lowest limit of its range (see for example: II, m. 19-30). By adding a second cello, he is able to have the best of both worlds, exploiting the heights and depths of the instruments’ registers, and providing new opportunities for voice pairings and crossings. In the second movement of the quintet, m. 26-28, Schubert gives the first cello a line in the same range as the first violin, and ultimately the phrase ends with the cello as soprano.

On a structural level, the slow movement (Andante un poco moto) of the quartet and the slow movement (Adagio) of the quintet have similarities and differences. Their main melodies are both in the key of E (in the case of the quartet, E minor, vi of G; in the case of the quintet E major, III of C). The quartet places the melody in the cello, with accompanying embellishments in the upper voices. The quintet opens with a slow-moving, almost timeless theme in the middle three voices, with the outer voices providing bass and embellishment. Both works feature a stormy, even violent B section, providing dramatic contrast to the A material, and in each the return to the A section is relieving but not fully settling. When in the quartet Schubert brings back the A section, it is developed and embellished, he adds a countermelody (example: m. 90, m. 111), lays out the second part of the theme in canon (m. 98-105), and changes voicing and pairings. He also brings back the stormy B section in a shorter version, this time in D minor, creating an overall “slow-rondo” structure (A B A’ B’ A”). The quintet is structurally simpler. Here the return of the A section, in the inner voices, is exactly the same as the opening, save for a few subtle dynamic differences. What has changed is the outer voices, who had earlier provided a rather sparse accompaniment of pizzicati and bowed commentary, now wind and weave with much more flowing and conversational embellishments of the theme. A most incredible moment comes at the end of the A’ section, in m. 91, whereas in A the music cadences in E major and then turns tonic into leading tone to lead into the middle section. This time the E major chord opens out into a C major chord, the dominant of our all-too-familiar and terrifying F minor, which surges up, but then sinks back by way of a rather magical augmented sixth chord (m. 92, beat 3), leading to the last sigh of a cadence.

It seems that Schubert went to his furthest reaches of experimentation in the G major string quartet, using new colors and timbres, effects, and that by the time he wrote the string quintet he was ready to attempt the ultimate levels of simplicity, not writing a bar more than necessary to say what he had to say. The quintet’s Adagio movement somehow manages to be all at once rich and transparent, fleeting and simple, stormy but not clouded over, and even combines darkness with light.

It is interesting to look at key structures in Schubert’s slow movements, and equally fascinating to see how he transitions from one place to the next. In the string quartet’s Andante un poco moto, the overall layout is as follows:

While the quartet uses 3rd related keys, the quintet favors 2nd relations, using the rather exotic Neapolitan (or lowered II key) relationship. Its harmonic outline is:

A few more minor points of interest on the melodies in Schubert’s quartet and quintet: The melody of the quintet’s Adagio resembles the opening melody of his song “Auf dem Strom”, which is in the same key and was written in the same month as the quintet. I also see a resemblance, shapewise, between the A melody of the quartet’s Andante un poco moto (m. 3) and the B melody in the quintet’s Adagio (m. 30). And a small motivic similarity: Quartet, II, m. 97 (ending the first phrase of A), Schubert writes a scale figure from 5 to 1 with the following rhythm: In m. 14 of the quintet we have that same rhythmic figuration, also on a scale from 5 to 1, and ending the first phrase from A.

There are countless other similarities in these and in the other movements of the two chamber works, but I have tried, by looking more in depth at these two movements to discover and describe some of the evolution Schubert’s ensemble writing made over the course of his final years.