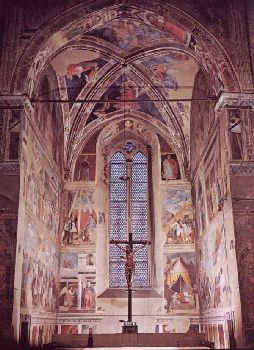 How are cherished art works of the past best served and most deeply savored? A visitor to the Basilica of San Francesco in Arezzo will find the remains and restoration of only what Piero della Francesco himself painted in the great 15th century frescoes. The restorer has removed all of the renderings of the many subsequent artists who sought to keep the paintings in good repair, and painstakingly returned them to their true, original layer. Pianist Artur Schnabel advocated a close and reverent examination of musical texts, as the means by which the original work of the composer could be reclaimed from its misrepresentation and distortion at the hands of the nineteenth century virtuoso.

These two examples reflect a serious and welcome trend toward a respect for the work of art as its creator conceived it, as a means to experience its revelations. Who better than the artist can show us the truth? Even the most careful editors and restorers have sometimes led us astray. We must now depend on the research of dedicated scholars to return us to the primary work.

In his lengthy and detailed account, Franz Schubert’s Music in Performance, musicologist David Montgomery seeks to deliver the composer’s music from what he perceives as the many departures from the true path that have been taken over the past hundred and fifty years. Since most of Schubert’s music, especially the instrumental music was published after his death, it is Montgomery’s view that Schubert was the victim of his publishers. He could not defend himself against sloppy editing, including willful, uninformed changes in the texts. Montgomery gives us convincing evidence to show that Schubert was precise and careful in crafting his manuscripts, and that details such as dynamics, articulation, tempo, repeats, bowings and ornaments are structurally significant and deserve close scrutiny.

Assimilation, i.e., playing the final note of a triplet with the final note of a dotted 8th and 16th figure when they are presented simultaneously is, in Montgomery’s view, absolutely unacceptable, and he and pianist Paul Badura-Skoda, among others, have been debating the point for years.

Montgomery is equally fervent on the subject of intuition and performance clichés, which can diminish the serious impact of Schubert’s music. One example of this is the tempo customarily taken in the opening theme of the second movement of the E flat Trio, D 929, which is too slow to match the tempo of its reappearance in the Finale, when surrounded by faster-moving material. The slower tempo at the opening may allow for great expressiveness on the part of the performer, but it makes no structural sense in the context of the work as a whole.

The unmarked ritard and late Viennese Schrammelmusik (rustic, boisterous Alpine dance music) hesitation in the following passage of the Finale of the C Major Quintet, D 956. is another good example of the type of performers’ indulgence that Montgomery feels is completely inappropriate to Schubert’s music.

The volume fade on the final note of this work was for more than a century standard practice among chamber musicians, simply because the editors of the first (Spina 1853) and later editions, as well as several performing editions had read Schubert’s expressive mark as a hairpin decrescendo, instead of an accent. As Montgomery accurately observes, the decrescendo is completely out of context, and recently the Neue Schubert Ausgabe (NSA) editor, Martin Chusid, has restored the accent. Now some ensembles are responding to the logic of it.

A fascinating observation of the composer’s detailed and demanding articulation is his slur over the pizzicato notes in the cello, in the variation movement of the d minor Quartet, D 810.

Montgomery cites this as an example of Schubert’s sonic, structural and notational idealism, in this case a commentary on the violin’s portando figure in m 47. The text goes on to consider and elaborate on four different kinds of pizzicato in Schubert scores.

These examples relating to string technique and interpretive issues in a few of the true masterworks of the Chamber Music repertoire are but a fraction of the material covered in this voluminous book. The same detail is applied as well to Schubert’s piano, vocal and symphonic works, with an additional look at a few operatic scores. A helpful and exhaustive appendix provides a list of pedagogical work relevant to the study of Viennese music from the time of the middle of Mozart’s career. It is a virtual cornucopia of material on the history of performance practice for the serious scholar or for the merely curious.

This book is an important guide to the music of Franz Schubert for the performer, as well as the listener. David Montgomery’s credentials as scholar and performer are well established. Here he uses them to return the reader to the original score and musical intent of the composer, while raising intriguing questions regarding authenticity, interpretation, history, and performance practice.

Previous: So You Want to be a Musician
Next: The Care and Preservation of Fine String Instruments